The Domain Name System (DNS) is a hierarchical and decentralized naming system for computers, services, or other resources connected to the Internet or a private network (Definition from Wikipedia).

A root name server is a name server for the root zone of the Domain Name System (DNS) of the Internet.(Definition from Wikipedia).

The output of the following command nslookup -q=ns . is 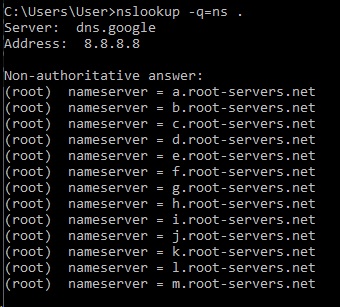 Authoritative name servers provide DNS record information and they are hosted by a provider or domain name registrar.

Usually, these servers use to cache DNS record information, so a lot of queries related to some popular domains never end up reaching the authoritative name servers.

Obviously, If a domain’s record is not cached, then the resolving server will “climb” the DNS tree up to the authoritative server for the domain’s record.

a name server (DNS server) answers to the question: “Which is the IP related to this domain?” it’s a repository where the domain is mapped with an IP, but it doesn’t mean all these information is stored in a single server.

They are actually distributed worldwide. These nameservers, named the root nameservers, store only the locations of the TLD (top-level domains).

TLD’s are the characters that you usually see at the end of a domain such as .com, .net and so on..
Every TLD has its own set of nameservers that are used to store the information that says who is authoritative for storing the DNS records for that domain.

Usually, the authoritative nameserver is the DNS provider or the DNS registrar.

We can register a domain name and purchase a hosting service separately.
We can then register the domain name with any company and choose the server that hosts our web pages at any other company.
If we want everything to work properly we need to link the domain name to the server hosting the site.
To do this you need to configure the servers dedicated to DNS.
The servers dedicated to DNS are computers that host the DNS (Domain Name System), a database created to convert the text domain name into a numerical code (IP address) that is understandable to the machines and essential for computers on the network to communicate with each other.
By setting up DNS correctly, you can link our domain name to the server that hosts our website.
When registering a domain and requesting a hosting service from the same company, we do not have to worry about DNS because it does all the service provider.
The Name Servers of company A from which we registered the domain are said to be authoritative for that domain.

The authoritative term indicates competence, not a hierarchical priority order.

To understand DNS propagation, it is crucial to first explain HOW DNS works.

On the contrary, it will almost certainly use different DNS servers (normally those of its ADSL provider).

So a user who uses (for example) AOL connectivity, to go to your site will refer to what will be pointed out by AOL’s DNS servers.

The DNS servers are connected to each other, worldwide, and make up a real network that continues to exchange and update data.
So if you make a change to DNS, it will take some time for it to propagate on all Internet DNS servers:

How much time? It depends

… it is a progressive event, which can start a few minutes after the change and end up to 48 hours later.

This time is called DNS PROPAGATION TIME and, although not in principle controllable, it is possible to do something to try to reduce it to a minimum.

The TTL is the time, expressed in seconds, for which another DNS server can consider the information received valid.

That is, a small value (eg 3600, then one hour) will cause another DNS server, after receiving the DNS configuration data of your domain, to consider them valid for one hour; therefore, to any request, the arrivals in about 60 minutes will respond with the same configuration. After 60 minutes, it will take care to update the data again.

Thus, a low TTL guarantees – in principle – a greater speed of propagation of changes on the internet.

However, you should not give in to the temptation to always use low TTLs: these must be used only for modifications, while for the rest of the time high TTLs must be used.

This for a number of reasons:

a low TTL will result in the other DNS servers responding to any requests not with the cached data, but requesting an update of the same; this will then make the response of your site less fast

a TTL too low, or kept low for too long, can be ignored by some DNS servers, so even if you set a TTL of 30 minutes, it may be that after a week some DNS servers decide to ignore this information, and raise ( also significantly the value of TTL, in this way, in reality, we get the opposite of the desired result)

Two days before the change of DNS, intervene lowering the TTL appropriately

In the two following days, this information (ie “these DNS are to be verified every 30 minutes”) will be propagated through the internet

How to proceed then in the modification of the DNS for these to propagate with the maximum possible speed?

Then perform the DNS change, leaving the TTL low

Finally, 36 h after the change of DNS, intervene again only on TTL, raising them appropriately.

What are the values to set the TTL?

If no changes are made to the DNS, it is preferable to set a value as high as possible, which will generally make our site more “responsive”: therefore 86400

If instead, we have to make changes, it is better to lower this value as much as possible, taking care, however, to remain within reasonable values: considering that a value too low (like 600) could also be completely ignored by many DNS servers, it is convenient to use a value of 3600